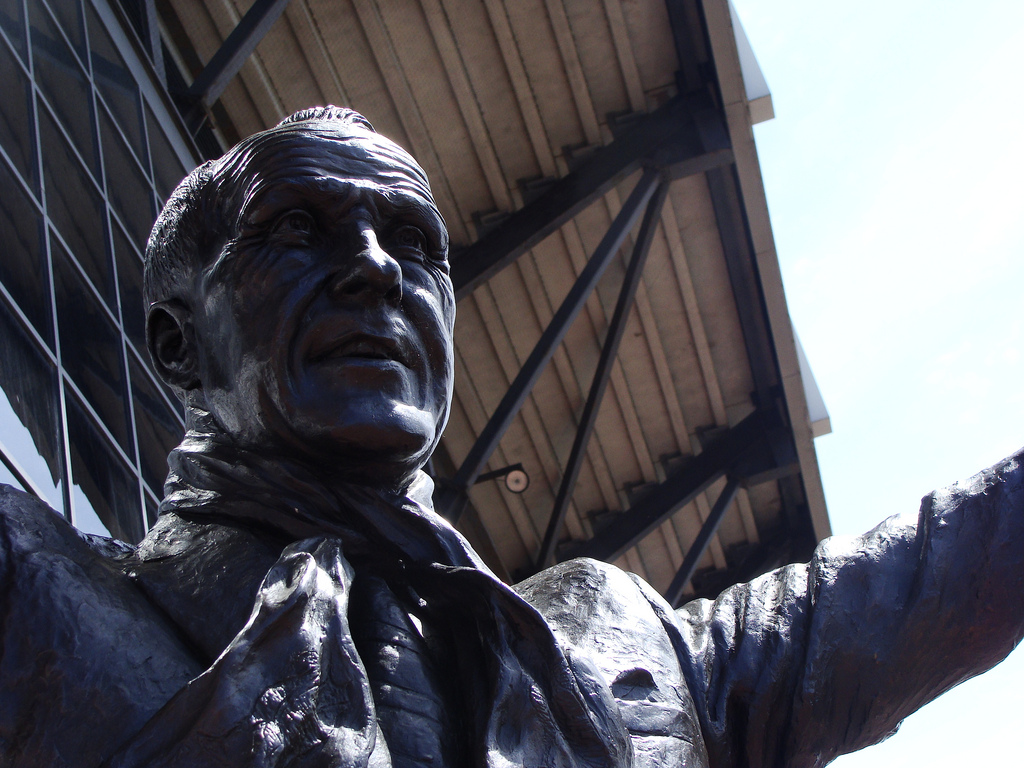 This column appeared in the Liverpool Echo in 2010. The primary focus was the rift between the supporters and then club owners Tom Hicks & George Gillett, the angle here picking up on the involvement of the late, great Bill Shankly’s grandaughter Karen Gill to help try and oust the Americans that had created headlines that week.

BILL SHANKLY made the people happy. It goes without saying, Tom Hicks and George Gillett haven’t.

There was a significance when one of Shankly’s grandaughters joined a recent campaign to oust Liverpool Football Club’s (now outgoing) owners.

In an e-mail sent directly to the movers and shakers involved in the club’s current financial plight, Karen Gill made an impassioned plea to the Royal Bank of Scotland to stop bankrolling the Americans’ debt-laden tenure at the club.

It was nothing we haven’t heard already via countless protests. The benefit of Shankly’s aura did add a bit of clout though.

Wrote Gill: ‘During the past three years, time and again Tom Hicks and George Gillett have shown that they are not fit and proper custodians of the club that my grandfather loved and devoted 15 years of his life to.

‘The business model operated by Hicks and Gillett is unsustainable with debts of £237million loaded onto the club, crippling the clubs ability to progress both on and off the field, with the new stadium and regeneration of the Anfield area seemingly further away than ever.

‘I call upon the chief executive of the Royal Bank of Scotland – Stephen Hester to stop supporting the current ownership with the renewal of crippling loans and urge Gillett and Hicks to sell the club with immediate effect to more suitable custodians who can help provide the future that Liverpool FC and the Anfield area so desperately need.’

Within a week, the club has been formally put on the market with the hope Hicks and Gillett are about to ride off into the sunset.

It would be far-fetched to claim Gill’s intervention was the straw that finally broke the camel’s back.

Of course it wasn’t.

But the fact the ball has finally got rolling in the wake of the Shankly family’s involvement does have a spooky resonance about it.

For fear of sounding like Derek Acorah though, the point here is that it was Shankly who first embraced the Liverpool supporters as a vital component within the ethos, identity and, of course, the success of the club.

In light of the damage that has been caused during the Americans’ three year reign, there is now a chance to build some bridges between the club and its core fanbase.

While cautiously optimistic that this is the beginning of the end for the Hicks/Gilett circus, supporters groups Spirit of Shankly and Share Liverpool were both quick to highlight the need for greater supporter involvement if and when the club moves forward under new ownership.

One of Hicks and Gillett’s failings at Anfield – and there have been many – was to underestimate the strength of feeling of Liverpool fans for their club.

As Shankly once said, ‘it’s a way of life, a religion to them. That’s not something you mess with like a rich man’s toy.’

Many lessons can be learned from what has been and – until the club is finally sold – will continue to be one of the most turbulent periods in the club’s history.

The importance of respecting the values upheld by the supporters should not be lost on any new owners.

Newly appointed independent chairman Martin Broughton has done his homework when insisting he’s ‘not simply looking for an owner. I’m looking for the right owner.’

The ‘right owner’ should be willing to cooperate with the club’s supporters and not view them merely as passive consumers who should be seen and not heard.

Responding to the news of the club officially being put up for sale yesterday both the Spirit of Shankly and Share Liverpool pointed to a section in the Labour party’s election manifesto that pledges to explore the concept of giving supporters first refusal on an option to buy up to 25% of a club’s shares should it come up for sale.

A cheap political gimmick or genuine concern for the way the game is increasingly being mismanaged? We won’t know for definite unless Prime Minister Gordon Brown remains in office.

Given the problems at Liverpool in recent years, it is an idea that has been roundly welcomed on the stands inside Anfield.

There are still plenty of unanswered questions that the fans will rightly demand answers for.

It’s a case of once bitten twice shy and they will want guarantees that the best interests of the club are pivotal to any purchase.

But while the Hicks and Gillett’s of this world may come and go, one constant will always remain; the fans.

YOU have to question the wisdom of Fernando Torres’ knee specialist this week.

Well intentioned or not, Ramon Cugat’s decision to go public with his verdict on the Liverpool striker’s capacity to face West Ham on Monday night has only piled pressure on Rafa Benitez to play his star striker.

By saying the problem was ‘not serious’ and ‘in normal circumstances, he could be ready to play next week,’ questions will now be asked should Torres not figure against the Hammers.

“The decision is now up to Liverpool’s medical staff and the manager,” finished Cugat.

Given how we were told Torres was staying on in Barcelona to give his knee time to settle before being reassessed, Cugat’s comments seemed a little premature.

Gillett remains in the race at NASCAR

AFTER being forced to sell his majority share in the Montreal Canadiens last summer – pocketing a tidy £230million profit in the process – George Gillett’s NASCAR team is now in trouble.

Richard Petty Motorsports has been in default on a loan in the region of $90 million since February.

The next bit will sound familiar to Liverpool fans.

Gillett is looking to restructure the loan, which was issued by a syndicate of financial institutions led by none other than American investment bank Wachovia.

That’s the same Wachovia who, combined with the Royal Bank of Scotland, Gillett and Hicks, in the name of Liverpool FC, owe £237million.

However, when Gillett bought the team in summer 2007 he ensured any collateral set against the loan would be assets of the debtor. In other words the loan does not have any recourse back to Gillett’s personal fortune but instead the race team.

The best the Wachovia led syndicate could hope for is to seize the team’s assets such as the garage and cars. They can’t touch Gillett though.

It is not dissimilar to the arrangement Gillett and Hicks have masterminded at Anfield.

*This column was first published in the Liverpool Echo.