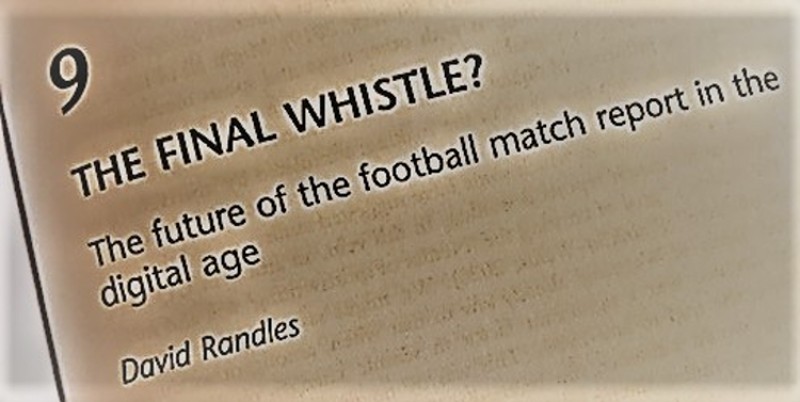 From bouncing around ideas regarding the digital landscape in sports reporting, to then embarking on a year long research and writing project before a global pandemic delayed the publishing and distribution process, it was with a mixture of pride and relief that I saw my first academic book chapter neatly bound in black and white.

‘The Final Whistle? The future of the football match report in the digital age’ is one of nine submitted chapters produced by a range of mostly journalists-turned-academics that make up ‘Insights on Reporting Sports in the Digital Age – Ethical and Practical Considerations in a Changing Media Landscape.’

Edited by Roger Domeneghetti, this is the first book in the Routledge Journalism Insights series and examines the major practical and ethical challenges confronting contemporary sports journalists which have emerged from, or been exacerbated by, the use of digital and social media.

Looking back at my original abstract (copied below) the drawn out nature of academic research, writing and publishing is captured quite succinctly in that the abstract was submitted when I was employed by one university and yet the book finally landed some two years later when I was on the payroll of another.

Of course, the devil is in the detail and the hope is that my findings were not out of date by the time we went to press!

As the chapter very much deals with the digital transformation of football match coverage, starting with a historical standpoint through to current practice and onto future projections, I’m assured in that its relevance can be justified for the next few years at least.

While a sizeable part of my time in industry was spent composing match reports, analysis, colour, quotes and think pieces, it was incredibly useful to hear from 10 football reporters and editors who are still out there in the wild chasing the top line and looking for ways to engage what several said is an increasingly discerning and digital audience.

As part of a wider and ongoing project – otherwise known as my PhD – this micro-study has been particularly beneficial as the catalyst to start positioning football journalistic practice alongside theoretical and philosophical thinking.

Perhaps we can think too deeply about some of these things when the reality of reporting is that demand for content means there just isn’t time to be concerned too far into the future when deadlines are increasingly in the here and now. But it has been very helpful and productive to gather the views of those who were kind enough to talk to me during the course of the research to gain a spectrum of perspectives as to the future of the football match report.

“The match report is both the essence of sportswriting and its area of sorest neglect. After all, so much sportswriting now revolves around the match,” (Steen, 2008).

If the sports event is a central tenet of sports reporting, the increasing demand for content, coupled with a proliferation of ways to consume it, has resulted in organisational and structural shifts in sports journalism that are symptomatic of the wider media landscape.

Since Steen recognised a change in the ‘nature and perception of the job’ some 12 years ago as a consequence, he explained, of ‘live tv coverage, the internet and mobile phone’, further and rapid technological advance has had a profound influence on sports journalism and, specifically here, match reporting. Add social media to the mix and we can interpret the new digital match reporting environment in terms of Rainie and Wellman’s “triple revolution” logic (2012) that sees the transformation of social life as a consequence of fast Internet, smartphones and social media. Further here, Rainie and Wellman claim an outcome of this transformative triple revolution is a change in the way people obtain information.

As media consumption habits increasingly determine the way digital content is produced, hosted and distributed (Boyle and Hutchins, 2017), match reporting is now likely to be measured by traffic, bounce and engagement rates over print circulation figures. If in simple terms match reporting is the story of an event that unfolds before the sports writer, the intrinsic link between journalistic practice and technological advance can be explained by Handler-Miller’s proposition that innovations in digital media lead to corresponding developments in storytelling (2008).

From the time-served and continuing traditions of on-the-whistle, running and considered reports, through to emergent non-linear forms including live text commentary, smartphone streamed full-time verdicts, and graphic-led narratives composed specifically for mobile consumption, this chapter will discuss how new ways to engage audience across a range of social and digital platforms are leading to innovation in match reporting.

With input from practising sports journalists, combined with theoretical perspectives concerned with storytelling and digital content production and consumption, the chapter will argue that these new narratives have implications not only for sports journalism and the growing band of sports media content producers telling stories of and around the football match, but also for educators responsible for delivering skills that draw on best practice from decades of tried and tested match reporting methods while embracing change to ensure students have the requisite skills to succeed in this challenging yet dynamic landscape.