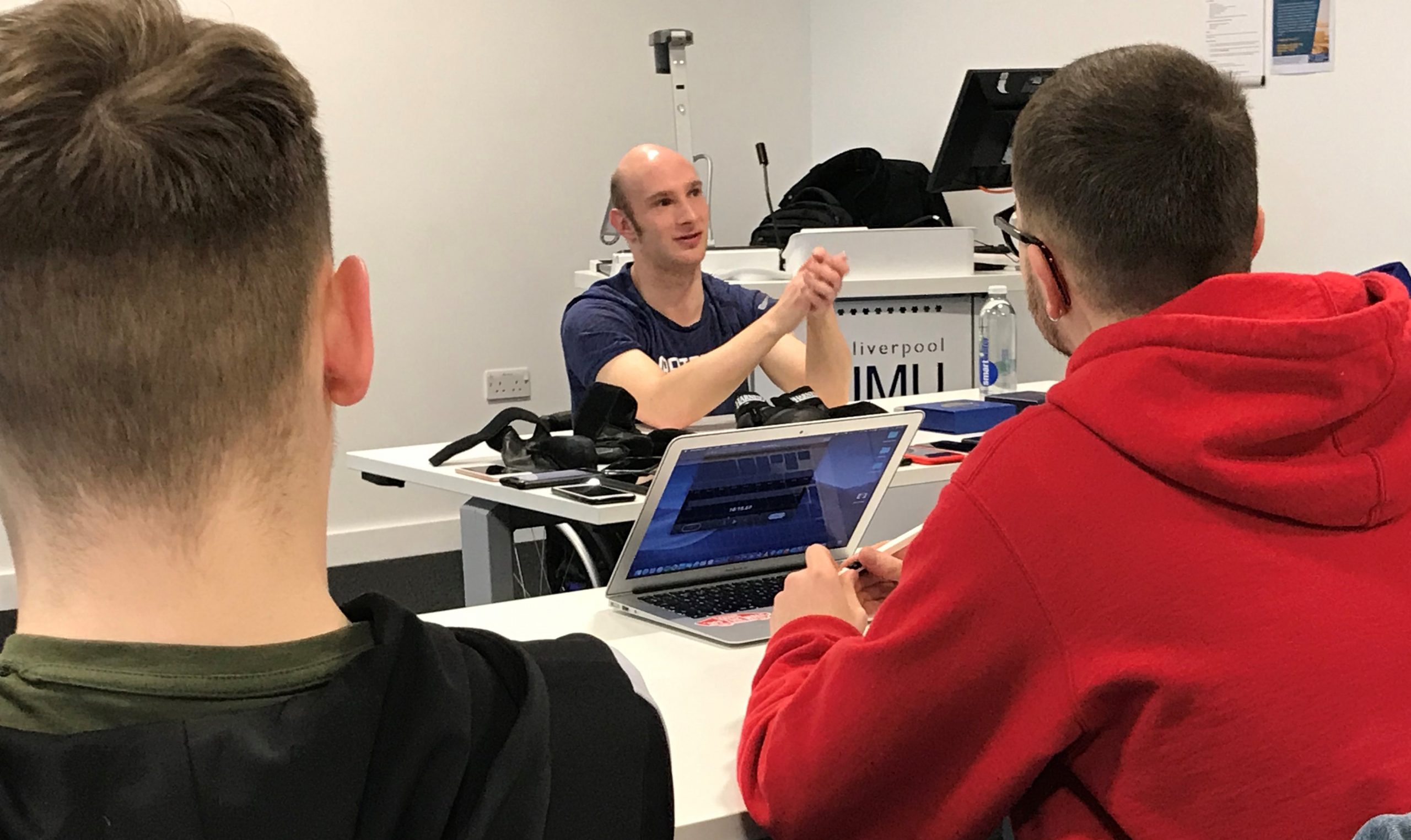 Team GB para-athlete Andrew Small was interviewed by Liverpool John Moores University BA Sports Journalism students for a live press conference scenario on their second year Sports Features module. Below is my example of a profile feature composed from the interview that lasted nearly an hour. As the students have a brief to write an 800 word profile, the exercise helped them tailor line of questioning around research informed angles and then make editorial decisions to separate superfluous detail from stronger lines to generate reader interest in Andrew’s story >>>

From spectating at the 2012 Paralympic Games to being among the medals in Rio just four years later, wheelchair sprinter Andrew Small is in a hurry to make a difference…

“There might be a bit of delay as I go through them all in my head,” he smiles.

“I quite like Inception. It’s a nice one. It sort of messes with you a little bit. It drops you, picks you back up then throws you everywhere. By the end of it, you feel like you’ve had an experience. You’ve been on a journey.”

While Small’s story is still being written, he inadvertently describes the narrative of his life so far.

Handed only a five per cent chance of survival after weighing just 1lb 6oz at birth, the 27-year-old wheelchair sprinter has overcome the odds to podium at the 2016 Rio Paralympics and World Championships in 2017 and 2019.

“I was the weight of a bag of sugar,” says Small. “Some people might look at that and go ‘wow’. I use it to put my fullest self into everything I do. It makes it more special in a way. Your personality and outlook on life is shaped by the people around you, by the experiences you have.”

It was the experience of watching David Weir (pictured above) and Hannah Cockroft secure six gold medals between them at London 2012 that encouraged the then self-confessed ‘couch potato’ to take up the sport. And yet, much was still stacked against the Stockport Harrier achieving what he has.

“When my coach first met me he said he’d seen more meat on an OXO cube,” chuckles Small. “Hopefully I’ve changed a bit since then.

“Dave and Hannah were a big influence to get me into it. What inspires to keep me going? I look back on myself beforehand, the growth in all aspects is unrecognisable. Sport has had a profound impact on my life in that sense. It has also given me a platform for the disabled community. I quite like helping people. It’s nice. That’s a bi-product of what I do, plus I get to travel, I get to make friends. It’s great.”

London 2012 was life changing for Small. He also sees it as a tipping point for para-athletics, the legacy of which he and others like him are benefiting from today.

“It was definitely a watershed moment for us at least, and it probably is for the host countries,” says Small.

“From being vaguely aware of it, it’s suddenly shoved in your face, full on exposure. You can’t escape it. That’s been a turning point. Since then we’ve gone from strength to strength.

“We (Great Britain) are now the example of how to cover our events. From broadcasting to print media and so on, other countries are looking to us and realising they can step up their game. That’s good.”

An Olympic bronze medallist at the 2016 Rio Games, Small competed in Dubai last November where he added World Championship T33 silver to the World bronze he won in London two years earlier. With each passing tournament he recognises greater exposure for para-athletics, something he believes will help nurture a new generation of athletes.

“2017 is the most special for me,” he reflects. “It was a home games. You always want to do well in front of your home crowd.

“At last year’s World Championships, there was a record 24 broadcasters from around the world there. We’ve also recently been granted the same status as Olympic coverage for TV exposure, which is great.

“I think we are very much in a four stage process. The first step was London. We’re in the second stage now. By the end of my career, I’d like to see it more equal, not as niche but more accessible and available for people who need it.

“When I was younger, you didn’t know [about para-athletics]. If you were in the bubble you knew about it. If you weren’t you didn’t. I would have liked to have found it sooner. But I found it when I did and I’m giving it a good go.”

Small ‘s hopes of making it to the Tokyo Olympics this summer have been put on hold with the Games postponed until 2021 due to the Covid-19 pandemic. That does at least provide an extra year to prepare to face his 100m nemesis and reigning World and Olympic champion Ahmad Almutairi (pictured above, centre). Sporting rivalry aside, Small calls the Kuwaiti a friend, someone to have a coffee and a chat with after events. Of course, winning is the ultimate for any athlete but, for Small, it really is the taking part that counts.

“It’s a common misconception when people say ‘hey, you, go for gold.’ If you do get there just enjoy it. Just say you are going to do well, the best that you can do. Sometimes we can be too gold-centric focused. It’s a shame. Why not just celebrate achievement for achievements?

“Enjoy it. Make the most of the experience. These things are finite. It’s one life. We’ve got to live it as such.”

When we consider Small’s journey, just his competing at the highest level is awe-inspiring achievement in itself. Medals are a bonus.

Perhaps one day, somebody will make a film about him.