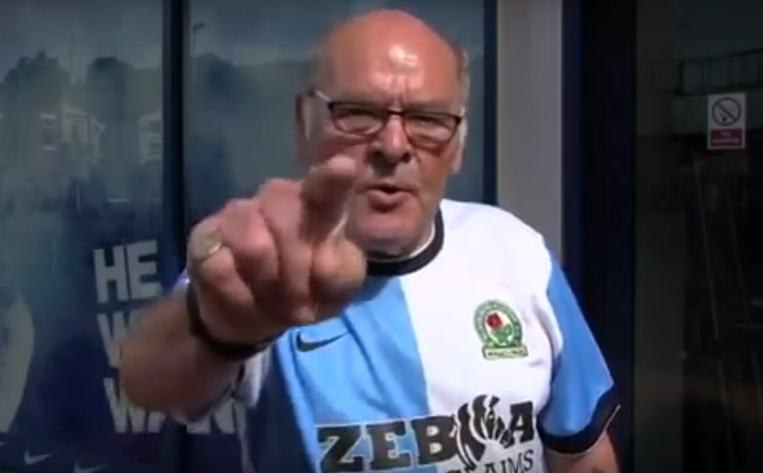 While Gerald Ratner can always be presented to disprove the theory there is no such thing as bad publicity, the words of Oscar Wilde appeared apt when Blackburn Rovers were accused of a brand marketing faux pas on the unveiling of its new strip.

If the only thing worse than being talked about is not being talked about, Rovers’ 2014-15 kit launch certainly had tongues wagging, twitterers tweeting and Facebookers liking – even if dislike may have been the motivation behind some of the social sharing.

Indeed, scorn, ridicule and bemusement appear to be the driving forces behind much of the response from mainstream media who were quick to criticise the Ewood Park club for its somewhat leftfield if not exactly scientific approach to social online video marketing.

To cut a one minute 45 second video story short, Birdy’s unexpected date turns out to be at Rovers’ club shop where he changes into the new shirt before addressing the camera in what to the untrained ear sounds like Blackburn brusque insisting ‘You know you want it.’

No sooner had the video been uploaded to YouTube than it was removed, an act the club insist was stage-managed from the outset. Damage done or mission accomplished? Either way, the vultures had started to circle.

Birdy’s Date is coming to an end, he has just just an hour left. Don’t miss out! https://t.co/riQ3sXvURB #birdysdate

Having endured a regime that has presided over the managerial appointments of Steve Kean, Henning Berg and Michael Appleton, Rovers fans have learned to develop thicker skins in recent years.

The circus that has enveloped the club has made it an easy target. And it was in this context that #birdysdate was seemingly received by the wider general audience who weren’t in on the joke. Nonetheless, it caused a stir.

Key ‘Blackburn Rovers’ into Bing three days after the launch and the first news story pulled up was the Lancashire Telegraph’s reaction with Blackburn-born fashion guru Wayne Hemingway demanding the club put the video back on You Tube describing it as ‘comic gold’ and ‘marketing genius’.

Google the club’s name and an embed of the much maligned video from the MailOnline held centre stage under the header ‘Blackburn Rovers release funny advert for new kit.’ It’s not the most disparaging headline and, according to its Google ranking, is one that proved popular with users.

Taking advantage of an opportunity to maximise the potential of what fast became a hot topic of online debate, the MailOnline added a comment piece asking ‘Is this the strangest kit launch of all time?’

The Independent had a more scathing take on the ‘bizarre’ video while The Mirror went a step further enquiring whether the ‘cringeworthy’ campaign was the ‘worst of all time’.

Meanwhile, the Belfast Telegraph labelled the advert as ‘strangely funny.’ Perhaps not as strange as the Northern Irish title running with it in the first place. Belfast isn’t exactly a stronghold for Rovers fans now, is it?

Like the MailOnline and others eager to jump on the Blackburn and Birdy bandwagon, the opportunity to attract hits with a trending story was too good to ignore.

And that brings us back to the crux of the matter.

As sharp intakes of breath were taken by those aghast at Blackburn’s ‘amateurish’ and ‘embarrassing’ attempt to drive publicity, online traffic was careering out of control.

Birdy’s acting debut may not have been everybody’s cup of tea, but then it wasn’t supposed to be.

After attracting a staggering 250,000 views in just 24 hours – videos on Blackburn’s YouTube channel rarely get more than 5,000 views, most are in the hundreds – the club stuck to what it says was always its plan to remove the video, happy that the viral views had vindicated its maverick approach.

“We always knew the subtlety of the video wouldn’t be picked up immediately by all,” Blackburn Rovers director of communications, Alan Myers, told the Lancashire Telegraph.

“We wanted to steer away from the stereotypical ‘model flaunting’ approach and bring football and our club back to the fans.

“We wanted to, in a light-hearted way, remind people football will always be about supporters.”

Whatever your thoughts on the campaign, #birdysdate gatecrashed a £750m party that saw adidas and Manchester United tie the knot in what otherwise would have been the only UK kit deal to make national headlines last week.

That in itself is a victory for the Championship club who haven’t rubbed shoulders regularly with esteemed company such as United for two seasons and counting.

In an era of reduced ad spend, consumer behaviour is forcing brands to innovate online, particularly at ailing businesses such as Blackburn Rovers Football Club where, despite the £23m takeover in 2010 by Indian poultry tycoons the Venkateshwara Hatcheries Group (Venky’s), the club announced an annual pre-tax loss of £36.5m for the year ending June 2013.

Compare that with a £4.3m profit a year earlier when they were clinging on to their Premier League status. Add to this how average home attendances have since dropped from around 22,500 to under 15,000, and the appeal of cheap yet penetrative marketing methods can be obvious for a brand in Blackburn’s position.

http://t.co/zTlZN8whIG @Chrismc89 have you seen Blackburn’s kit launch video? Comedy gold!!! Their fans are fuming about it… #birdysdate

Despite polarising opinion, this tongue in cheek approach of targeted viral marketing was a natural fit for Rovers in this instance.

Yes, there was criticism of the campaign on social media but, in the main, feedback has been positive from the majority of Rovers supporters. On the contrary, mainstream media outlets took a largely derogatory tone.

So, why the distinction?

The answer may in part be found in the differing expectation and sensibilities between audiences of conventional news brands and emerging social and digital-savvy consumers more willing to overlook the finer details of traditional production values to extract instant gratification from an intended message.

As Myers alludes, those in the know got it while others missed the point.

This has got to be the best kit launch that @OneRovers will ever do! https://t.co/8r2jEcLxt7 #birdysdate

Indeed, the club’s announcement that it had recorded its best first day new kit sales for six years would no doubt nullify much of the criticism.

It was mission accomplished regardless of any damage done.

As for Birdy, a follow-up on the club’s website shows the smiling 65-year-old with his arm around his real life date, wife Annette.

“Football comes first for both of us, so I wasn’t worried about this ‘new woman’ in his life!” she said. “It’s all just a bit of fun.”

As Blackburn and Birdy have found out, a bit of fun can be serious business.

In the end we got over a quarter of a million views for Birdy’s Date… #birdysdate pic.twitter.com/NJWuu8forI